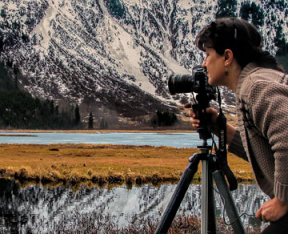 I am a self-taught photographer from Santa Rosa, California. I grew up on a sheep and egg ranch next to what is now known as Spring Lake Regional Park where I have many fond memories of feeding baby chicks and lambs as well as riding on our old tractor with my father. I was educated in Santa Rosa, California and worked for several years in the banking industry until meeting my husband. Having raised our children on a small ranch in the SE hills of Sonoma Countyfor many years, I am continually surrounded by the constant beauty and splendor of nature, my endless source for photographic inspiration.

Elements of my photographer’s palette include light, mood and substance whether my subjects are incredible landscapes, vibrant sunsets, beautiful waterscapes, as well as limitless creative interpretations of my photographic art through the Digital Darkroom of Adobe Photoshop. For several years I learned valuable operational, instructional and technical skills working in the digital darkroom of Adobe Photoshop from an Certified Adobe Tutorial Master here in Santa Rosa and began taking photographs with a Canon Elan 7 film camera, Canon 10D, Canon 5D but now shoot exclusively with the Canon 5DMark III digital camera and print all my work (prints, canvas, note cards, and postcards), with the Epson Stylus Pro 3800 or the Epson Stylus Pro 9890. In 2002 I became an active member of Santa Rosa Photographic Society Camera Club and learned many tools and techniques of the trade from so many locally talented photographers. It was then I developed my own style which I hope you will enjoy as you peruse my body of work. My portfolio consists of film, digital, creative and abstract images. I have recently revised my entire website to allow the client to view my art full screen to visualize up close the image you may have in mind for your home, office or business space.

In 2013 I worked as Assistant Director with the owner of an upscale Gallery in Santa Rosa, CA until it’s closing December 31st where I participated as one of the exhibitors as well.  I am a member of Professional Photographer’s of America.  Currently I am a solo artist with ongoing exhibits as well as having Collections at Summit State Bank/Santa Rosa Montgomery Village and Rohnert Park Branches And Sutter Landmark Medical Center Lab Offices along with 5 images displayed as part of a 29 local Artist Collection at the new Sutter Regional Hospital and 2 image Collection hanging at the new Sutter MOB Building in Santa Rosa, CA and a private collection in St. Helena.  I also exhibit my art at: Art At The Source/Sebastopol,  CA, group art exhibits, Marin Fair, craft festivals as well as having had several winning images published in Best Of Artist Books, emerging artist magazines, worldwide international photo contests including photographic venues in New York, Argentina and in 2014, 2 images were part of the 3rd Biennial and Fine Art Photography Exhibition in Malaga, Spain.  In 2010, I self-published my first book, ‘The Birth Of An Image…A Photographer’s Personal Reflection of that Intimate Moment.’

In 2015, I expanded my scope of work to include being an Event Planner for my daughter’s wedding.  It was a covered event by our local newspaper as well because my daughter is an avid skater in the Sonoma County Roller Derby and was married in her roller derby skates as well as all her bridesmaids escorted down the aisle in their skates.  Unusual but very classy!

I have been blessed to experience many spectacular photographic moments on my journey through life that I now wish to share them with others.

Sebastopol Center for the Arts Gallery exhibition: ‘Up Up And Away’, Sebastopol, CA, 2013

Art At The Source Open Studios, Studio Share in June, 2013

Art At The Source Preview Exhibit at Sebastopol Center for the Arts Gallery, Sebastopol, CA 2013

Day On The Green at Montgomery Village: Juried booth exhibition of art, 2013

1st Place recipient for the image, Into The Stormy Mist, in the Seascape Category for the 4th Edition of Julia Margaret Cameron International Photography Awards (Women Only). All 12 woman are invited to Paris next year to exhibit their winning image prepared and hung in a prestigious Gallery. October, 2013

Day On The Green At Montgomery Village, Santa Rosa, California Booth and Art Exhibit from 10am to 4pm April 15, 2012

WPGA invitation only from Julia Margaret Cameron international contest from my First Edition winning image ‘ELEGANT TULIPS’ to participate in a charitable ‘art auction’ exhibition. ‘Elegant Tulips’ was printed, framed and hung along with other selected winning images at The Palais de Glace in Buenos Aires, Argentina. Proceeds donated to Save the Children, January, 2012.

2007 Top Finalist in Photographer Forum Magazine‘s (Serbin Publications) Spring Photography Contest, Santa Barbara, CA for the past 7 years in a row. My winning selected images: Dancing Trees, Elegant Tulips, New Life At The Barn, Winter At Cooper Landing2, Entwined In Vines and Rippled In Reflections have been published in Best Of Artists Books, 2005-2011

http://www.sebarts.org/
Sebastopol Center For The Arts